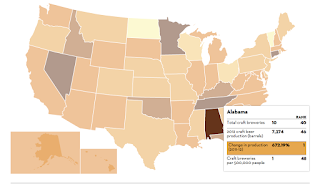 Link: Idea of the Week: Mapping the Rise of Craft Beer : The New Yorker:


.... from 2011 to 2012, annual production grew faster in the South than just about anywhere else, with the fastest-growing producers including Alabama (first out of all fifty states), Tennessee (fifth), Florida (seventh), and Kentucky (eighth). Other rapidly growing producers include Minnesota, Nevada, and Oklahoma.
Labels: Alabamania Birmingham