When the spirit moves you 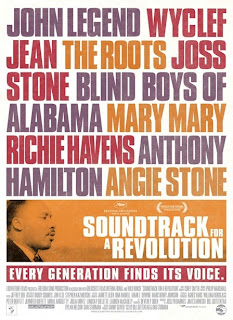 Hello all,
I writing to let you know of a few events coming up next week
In this year, as we are commemorating the 50th anniversary of the momentous event of 1963 in Birmingham, much has been written and much has been said.
But I’m not sure we’ve sung enough.

It’s the one sure way to cut through the complexities and come to the commonalities.
In my career as a reporter, I had the privilege of experiencing mass meetings at small rural churches in Randolph County. I heard Fred Shuttlesworth preach, and years later heard him eulogized in word and song.  I crossed the Edmund Pettus Bridge several times during the annual reenactment of the Selma to Montgomery March.

I wished at the time that I could do more to share with my readers the visceral experience of being there. Moving with people who shared a common purpose. The mood of joy, not anger, in the face of difficulty. The infectiousness of the music and the beat. Wanting to sing even though as a neutral observer I wasn’t supposed to participate. In some instances, I couldn’t help but make an exception and join in.
So, I’d like to invite y’all to some events being held this month at my church, Independent Presbyterian Church at 3100 Highland Avenue in Birmingham. To warm up and situate ourselves, we are screening Soundtrack For a Revolution on Wednesday, April 10.

This is a really powerful documentary that moves through the history of Civil Rights Movement with a focus on the music that animated it. Traditional and contemporary artists perform. It’s a full on feature presentation so be prepared. Singing along encouraged. 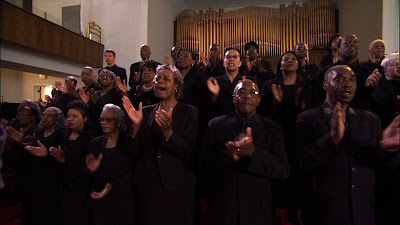 Featured in that film is Birmingham’s own Carlton Reese Memorial Unity Choir. IPC has the honor of hosting the choir at the our Sunday, April 14th casual service at 5 p.m.
On the morning of April 14, to get people in the mood and mindset, we are having a panel discussion with some of the participants in the marches of 1963. I’d especially encourage young people to come. One of the key things to remember about the crucial events of April and May of 1963 is the role that young people played in Project C: the confrontation in Birmingham that is now part of American History.

Details about the all the events are below. Guests are welcome. Y’all come.

April 10, 6:00 p.m.: “Soundtrack for a Revolution” (82 minutes) this 2009 award winning documentary film traces the story of the Civil Rights Movement through the stirring music that buoyed the spirits of the marchers. The New York Times said, “it’s the kind of film that will have audiences clapping and singing along.” The film features Birmingham’s Carlton Reese Memorial Unity Choir who will perform at April 14 evening service. http://www.facebook.com/events/492774877449818/
o    Optional southern supper by reservation 5:00 – 6:00 p.m. in the Great Hall. http://www.ipc-usa.org/templates/System/details.asp?id=24047&PID=967363
o    6:00 p.m. Introduction and film in the IPC Sanctuary

April 14, 10 a.m.: Highland Forum Panel Discussion, the Great Hall
Between May 2 and May 7, 1963, in Birmingham, 3,000-4,000 children marched to protest segregation, facing arrest and jail, snarling police dogs and powerful fire hoses. Images from those marches shocked the nation and helped lead to the passage of the Civil Rights Act of 1964. We’ll recall the mood in the city and hear firsthand accounts of how it felt to participate.
o    Larry Krannich, introductions; Tom Spencer moderator
o    Washington Booker and Paulette Roby – will provide firsthand accounts of what it was like to participate in the marches as teenagers.
o    Rowena McNab – IPC member will share personal recollections of watchign her parents support of the Civil Rights Movement.
o    Barnett Wright – Birmingham News reporter and author of 1963: How the Birmingham Civil Rights Movement Changed America and the World will help provide historical context and discussion of the ongoing journey toward justice.