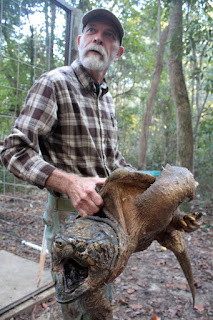 Nice story from an Alabama Department of Conservation and Natural Resource's Press Release. Last Month, Woody Bozeman was fishing the Tallapoosa River for catfish just off the boat ramp at Ft. Toulouse National Historic Park in Wetumpka, Ala.
At 11:30 p.m., he noticed the tip of his rod begin to bend slightly. In the 40 minutes that followed as he brought his catch to the surface, Bozeman would be surprised by the creature he’d hooked -- an 83-pound alligator snapping turtle.
It turned out to be tagged and Bozeman contacted the DCNR which was able to gather scientific information on this iconic creature of Southern waterways. They then released the turtle, which is on the state's protected species list because of  declining numbers
Labels: endangered Environment rivers