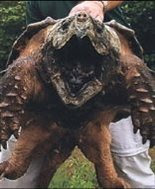 New protections urged for 5 species in Alabama under Endangered Species Act | al.com:
By Thomas Spencer
The iconic giant of Southeastern rivers, the alligator snapping turtle, is among 53 reptiles and amphibians that should be considered for protection under the Endangered Species Act, according to a petition filed Wednesday by the environmental group the Center for Biological Diversity.
In addition to the alligator snapping turtle, the center's petition to the U.S. Fish & Wildlife Service includes four other species known to occur in Alabama: the green salamander, which is found in the crevices of rock formations along the Appalachian mountains, and three species associated with the longleaf pine forests of south Alabama: the Southern hog-nosed snake, the Florida pine snake and the Carolina gopher frog.
Read more:
Labels: endangered Environment